Learn a Breakthrough Model of Couples Therapy, Elevate Your Intervention Strategies, and Increase Your Effectiveness (and Your Practice!) 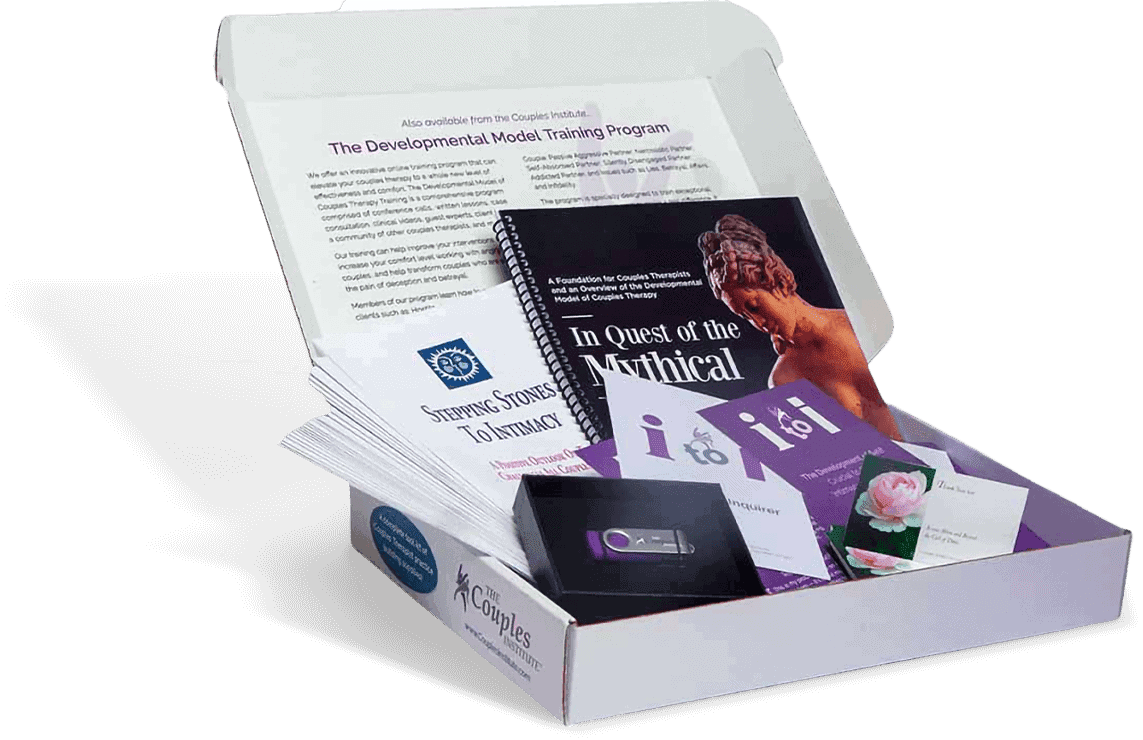 In Quest of The Mythical Mate is a 10-hour audio training of our world-renowned Developmental Model and a complete action-oriented kit for couples therapists who are ready to increase their skills and powerfully interact with clients.

Shipped directly to your doorstep, the kit includes a comprehensive roadmap for how to enter and transform a couple’s world of rage, turmoil, and despair. You’ll learn how to navigate the toughest situations, and go from feeling insecure and unclear to rock steady confident in your interventions and suggestions. Increase your confidence and effectiveness as you guide your clients from being painfully stuck to creating lasting breakthroughs.

What’s included in your "Quest Kit?"

Here's a Sneak Peek at the Lessons:

A PRACTICAL AND NON-PATHOLOGICAL MODEL FOR COUPLES THERAPY

Learn to diagnose, assess, and intervene with couples in targeted and precise ways.

THE SYMBIOTIC STAGES OF COUPLES DEVELOPMENT

Learn to work effectively with conflict avoidant and hostile-dependent couples.

CHARACTERISTICS OF 6 OTHER STAGES OF RELATIONSHIPS

Use a take-home assessment and a 5-minute exercise to better target your interventions.

GETTING OFF TO A POWERFUL START IN COUPLES THERAPY

Get a strong start – and stop sessions from deteriorating into chaos and finger pointing.

Recognize common, crippling symbiotic expectations, and know what to do about them.

Use four ways to increase differentiation and keep a relationship alive and intimate.

TREATMENT OF THE HOSTILE-DEPENDENT COUPLE

ADVANCED STRATEGIES FOR THE INITIATOR-INQUIRER PROCESS

Integrate breakthrough process used worldwide to succeed with your most difficult couples.

Help couples communicate on their most sensitive topics and address developmental trauma.

Ellyn and Peter co-founded The Couples Institute in 1986 and have an impressive legacy in couples therapy training. They are creators of The Developmental Model of Couples Therapy, a model that teaches therapists how to diagnose, intervene, and significantly help troubled relationships. They have presented workshops to therapists throughout the United States as well as Europe, Asia, South America, and Australia, and Ellyn currently conducts an online program that has trained professionals from more than 60 countries.

Peter and Ellyn are authors of two books. Their first book, “In Quest of the Mythical Mate,” won the Clark Vincent Award by the California Association of Marriage & Family Therapists for its outstanding contribution to the field of marital therapy and has been reprinted over 20 times. Their second book, “Tell Me No Lies,” was written for the public and has been of critical help to many couples.
Peter and Ellyn have been featured on over 50 radio and television programs including The Today Show and CBS Early Morning News, and they have been quoted in countless publications including The New York Times, Oprah Magazine, and Cosmopolitan.
Ellyn and Peter are unusual in their field in that they are a couple themselves and have confronted many of the challenges that they write and speak about.

What Other Therapists Are Saying

“My introduction to your work through this CD program was astonishing and enlightening. I feel so much more prepared to SEE the dynamics of the couples relationship and more capable of hosting the couple’s work.”

“My ability to assess a couple’s stage, and do appropriate interventions, has increased dramatically since listening to this CD set. Each time I listen to any portion of the set, I find material that I can immediately begin to use in therapy sessions. I highly recommend it for any therapist wanting to increase his or her effectiveness with couples.”

“I am already seeing results in working with couples, and I can see how valuable it is to be able to listen to the CDs over and over again at my leisure to really let the material sink in.”

“This CD set offers a unique opportunity to hear Pete and Ellyn explain the developmental model and show its direct application to clinical work. It enables the clinician to learn how to diagnosis and assess couples. These skills can be put into practice immediately. Drawing from clinical vignettes and their own personal experience the model comes alive. I am continually impressed by the way these presenters bring new depth and clarity to couples work. I have used this model in my practice and this CD set has provided fresh ideas to facilitate each partners growth that extricate me out of classic therapist dilemmas. Drs. Pearson and Bader provide a mental roadmap that the therapist can always return to to navigate the terrain of the couples therapy.”

Get your In Quest of the Mythical Mate kit TODAY with 10 hours of breakthrough clinical training!